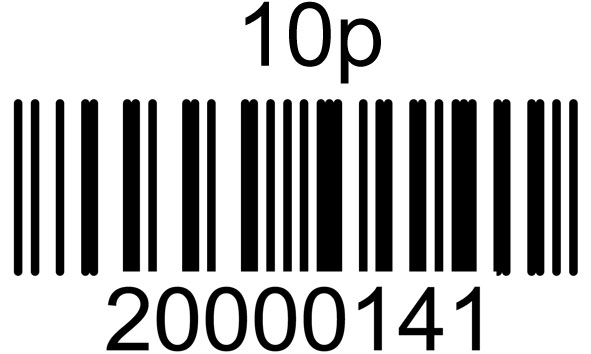 Lying in the fertile Vale of Mowbray between the Hambleton Hills and the uplands of the Dales, Thirsk has long been the focus of trade for a score of villages. The name may have originally denoted ‘settlement by a river’ and certainly the oldest dwellings cluster on either side of the Cod Beck. On the east bank St James Green bears the name of a long-vanished chapel and was the traditional site for horse and cattle dealing. 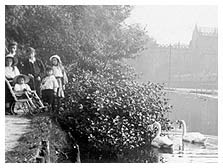 Across the bridge the road leads into the Market Place proper where the Cross and the Market Hall once stood. On Castle Garth excavations in 1994 uncovered early Saxon graves on the site where the Normans built a castle in the years after the Conquest. The lands around were held by Robert de Mowbray who gave his name to this district. The Mowbrays castle was later destroyed, but by the fifteenth century the citizens were prosperous enough to undertake the rebuilding of their parish church. The church apart, most of the architecture seen today dates from the eighteenth and nineteenth centuries when the improvements made by the great landowners brought prosperity to the farming community.

Set amid good grazing land, Thirsk was a centre for sheep, cattle and horses, where the Monday market and annual fairs saw lively dealing in beasts and produce. Skins and hides provided raw materials for tanners and leather workers working in shops and sheds crammed into yards behind the houses. 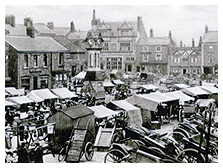 There were corn mills and breweries. There was trade in wool and linen; the wool industry eventually departed to the West Riding, but flax dressing and linen weaving continued into the middle 1800’s.

There was work for other trades as well; there were blacksmiths and farriers, there was an iron foundry in Norby, there were wheelwrights, carpenters and joiners, tailors, haberdashers and the oldest drapers in the kingdom. Shopkeepers supplied the needs of town and country folk alike, while a score of taverns slaked their thirst.

The courts met regularly in Thirsk with the gentry sitting as justices. The well-to-do built prestigious town houses or moved to the more salubrious surroundings of neighbouring Sowerby. 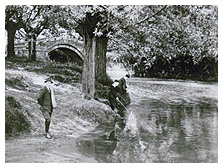 Medical men joined with the clergy, the wealthier farmers and successful merchants to form a social elite.

With the building of turnpike roads in the later eighteenth century Thirsk became a post stage on the route from York to Edinburgh; three of the Inns were noted as coaching establishments. Other houses offered stabling for the horses that were the chief means of local transport until well into the twentieth century.

The coming of the railway in the 1840’s and, later, the growth of motor transport combined with the effects of two world wars, brought radical changes to a way of life that had persisted for some two hundred years.

Crafts have died out and family businesses have closed; the old way of life has largely disappeared, but new industries have developed and fresh skills have emerged to keep Thirsk a thriving community.

The story of Thirsk goes back 1500 years

1086 Mentioned in Doomsday Book as two manors in Tresche with total value of 30 shillings. (12 houses; 60 inhabitants)

1489 The people of the North refuse to pay new taxes. Earl of Northumberland slain.

1513 The room above the church porchis the home of a hermit.

1580 Draper Bartholomew Smith runs a stall in the Market Place and founds a business that continues in Thirsk for 400 years.

1658 Deeds to Castle Yard (Garth) passed to the Bell Family

1786 Thirsk is a posting stage for coaches calling at the Three Tuns and the Fleece.

1814 Methodist Chapel built on The Green (replacing previous 1765 one)

1818 Elm tree on The Little Green burned down

1824 The Golden Fleece expanded by Blythe

1841 NE Railway opened. Line to Leeds opened in 1848 with station at Town End

1847 Register Office built at the end of Finkle Street

1849 The Savings Bank on Castlegate built

1850 Infermary built behind the Workhouse on Sutton Road.

1855 Steam Engine installed at The Mill

1857 Tollbooth etc and nearby ‘Shambles’ demolished

1865 Church School built on Piper Lane and The Green

1885 Court House in Westgate built next to Police Station

1896 Market Clock built to mark 1893 wedding of the Duke of York and Princess May of Teck - later to become King George V and Queen Mary.

1898 Metal bridge from The Green across The Codbeck erected

1901 Midland Bank took over The Yorkshire Banking Company on Millgate

1905 Paving ‘flags’ on North side of The Market laid

1907 Performances of the Thirsk Historical Play celebrate a thousand years of the town's history.

1909 Meynell’s at the Town End opened

1914 Cattle Market on The Green ceased

1920 The Royal Pavilion on the Race Course demolished

1933 Knowles Ice Cream shop opened on East side of market

1936 The Fleece purchased by Trusthouse Forte, as The Golden Fleece

1940 Central Café opened in centre of market by Dolly Dennis

1958 New Public Toilets built on site of old underground ones

1960 Methodist Chapel on The Green demolished

1963 Crown Hotel demolished and Fine Fare built in its place

1964 Round window installed above Knowles’ shop

1972 Ozzey Hall in The Market Place changed to Frank Jones

1979 Infants School on Finkle Street converted to The Library

1987 Threshers built on East Side of Market

1990 Post Office closed and facilities moved to the Coop shop

1991 Public Toilets in the Market removed

1998 Workhouse site converted to residential use

2019 Two-direction junction to and from A168 opened

Thirsk and Sowerby Past and Present is a town and countryside trail that has been designed by the local community.

It takes in 12 sites of historical and environmental interest. The route is circular, flat and approximately 3 miles long, but may be shortened (alternative routes are indicated on the leaflet).

In total there are 15 interpretation boards that extend from the centre of Thirsk and include such sites as Thirsk Castle, the old Mill Race and a prehistoric burial mound.

A leaflet with a map and walkers’ guide to find the explanatory boards around the town is available in the Tourist Information Centre. To see the trail online right now start here. You can also download (pdf).

Add your publicity (including FREE)